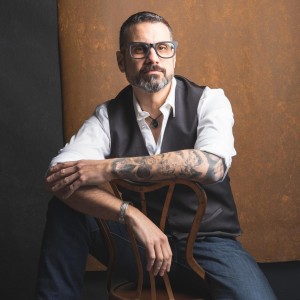 Influence: What is it Really? How do we Interpret It as Photographers and Artists

It’s important that we differentiate between influence and inspiration. To me, inspiration is that lightning bolt moment, that thing that happens during the process of creation that sends your work in a new direction. You can be inspired by anything – a word, a sound, a look – and enter a whole new world of creation. Inspiration is the one-night stand of creativity. It can be great but don’t depend on it to always be there.

In contrast, influence is like a long-term relationship with creativity. I need to be in sync with my influences and know when they’re going to come around again so that I can start planning for them. There are times when inspiration and influence merge together; these moments of synchronicity give me the confidence that what I’m doing matters.

I’m often asked if I take my influences into account when deciding what to shoot. Yes, absolutely! In fact, it’s precisely because of my influences that I find the courage and inspiration to do new things with photography. My body of work is a collection not only of images but also collaborations with artists who have inspired me in different ways over the years. If you’re feeling stuck creatively or wondering where your next idea is going to come from, start looking at your list of past collaborators for ideas on how they might inspire you again.

What is the difference between influence and inspiration?

As a photographer, I feel that my work has been inspired by other artists who make me want to create new images. But what’s the difference between being influenced and being inspired? How do you know if you should be using an artist as your source of inspiration or not? This question can’t really be answered with certainty because it depends on many different factors: how creative are they, how much do you like their art, what type of photography do you shoot… All these things come into play when making decisions about whether someone will inspire us in our own artistic process. Ultimately though, there seems to be some distinction here – we tend to think of those people who have had a huge impact on our art as being influential, while those who may have had an influence and inspired us to try new things might be more of the inspirational type.

It can be difficult to find the right balance between inspiration and influence, but it’s important for creativity. I think that as artists we have a responsibility to try new things, whether they come from inside or outside of us. And if you feel like there is something missing in your work- go out and get it! The world has so much beauty waiting to be discovered by those who are open enough to see it.”

As mentioned earlier, there’s a difference between “influence” and “effect.” Our effect as photographers is defined by how we interpret our influences in relation to one another throughout time; if an artist or photographer was influenced at all by their predecessors, then they must also be influencing those that come after them. Acknowledging these relationships can offer new insights into other artists’ works or help you discover new artistic avenues for yourself.

Influence can be defined as “the capacity to have an effect on the character, development, or behavior of someone or something; also: the power exerted by one person over another.” This definition makes it seem like influence only applies when there’s a direct line back and forth. But I think that influences are everywhere–in everything we do in life–even if they’re not immediately apparent. In photography specifically though, our influences help shape what we see through a lens and how we decide how to shoot subjects mechanically which leads into decisions about composition and lighting too (which could result in different outcomes). Sometimes those influences might even just seep out unconsciously without any intention at all! That being said, these influences can sometimes manifest in the form of more conscious decisions too when we recognize them.

What are the Influences of Photography?

The world around us is full of images and photographers, but it’s important to know which ones have had the greatest impact on your work. For instance, if you’re a street photographer interested in capturing candid moments, then Henri Cartier-Bresson may be one of your most influential artists. If you were raised by parents who love photography as well then they could also be considered influences too! The same goes for any other artist that has influenced your own work through their creations. Art itself can make connections between seemingly unrelated subjects so there will always be an influence from many sources throughout time in all different media types; these relationships need not only exist within photography though–they can come from all walks of life.

Do I Need to Care About My Influences?

In short, yes! The influence that an artist may have on your work is a reflection of who you are as well and how they’ve affected the way you see things in relation to their own influences. That’s not all though: it can also be beneficial for building relationships with other artists because they’ll understand where you’re coming from if they share similar artistic perspectives or styles; this could lead to collaborations down the road too! But do we need to care about our influences regardless–even if there isn’t any connection back? Yes, even more so than before now because appreciating these connections will help create new ways of seeing photography altogether.

As photographers and artists, our influences do shape who we are as creative beings to a certain extent by determining how we see things through a lens that may not be readily apparent if you don’t think about it–especially with regards to composition, light, perspective; there’s always something new or different to learn from an artist even if they’re working in another medium like painting. It doesn’t matter what your favorite style is: whether you prefer street photography or fine art black-and-white portraitures for example (or anything else), all these styles originate from somewhere!

The most important thing is to learn from these connections and not be afraid of different perspectives or styles. You might see something in someone else’s work that you never saw before, which could lead to new insights about your own artwork if you’re willing to step back and take a second look!

ENTER TO WIN A
PORTRAIT PACKAGE!!

By entering this giveaway contest you agree to receive occasional newsletters or promotional emails. We believe in your safety so we will never sell or provide your information to third parties.

Just Enter a Few Details Below And I'll Be In Touch Soon!